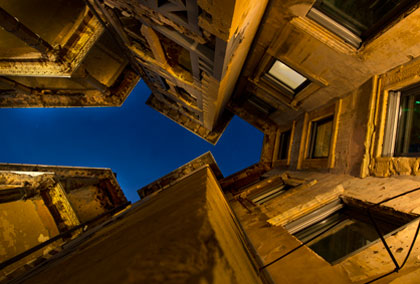 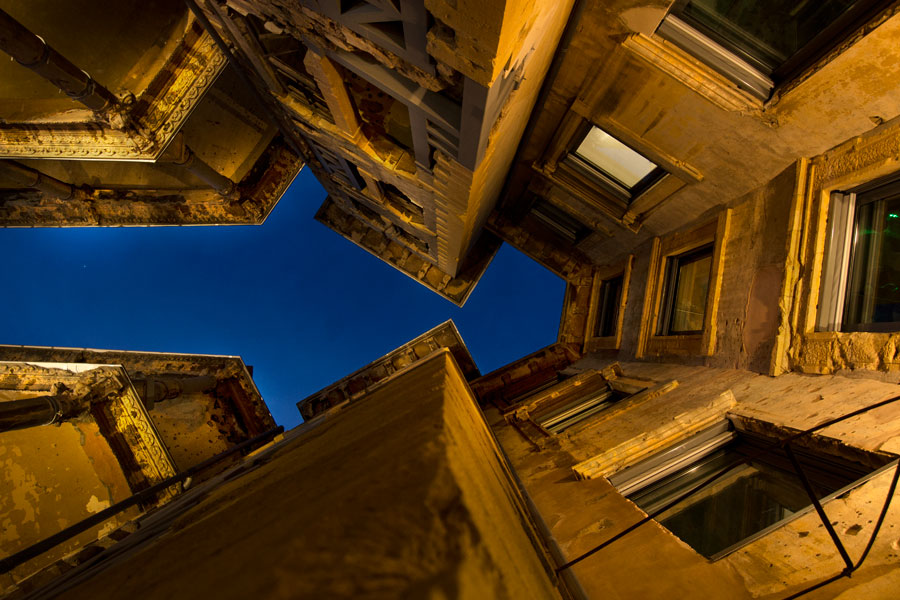 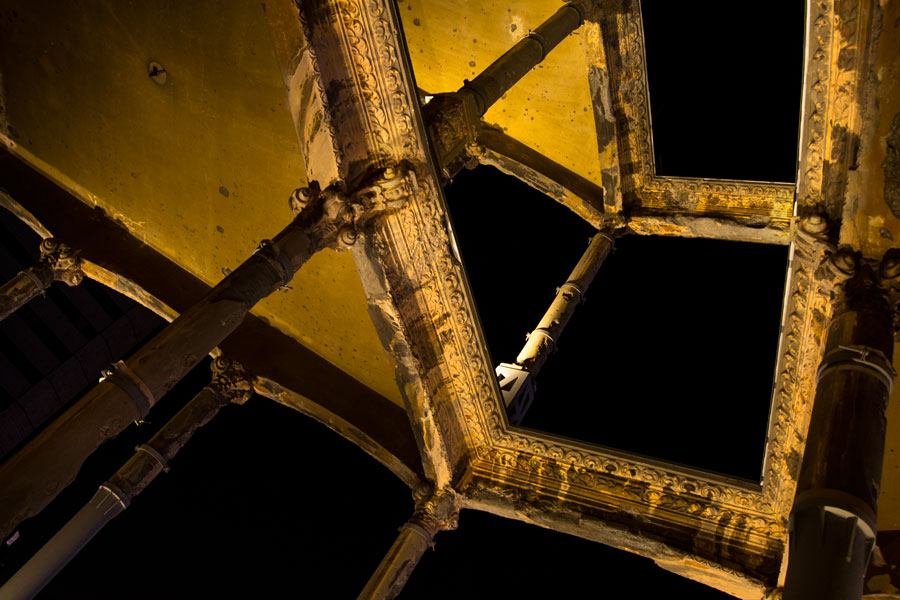 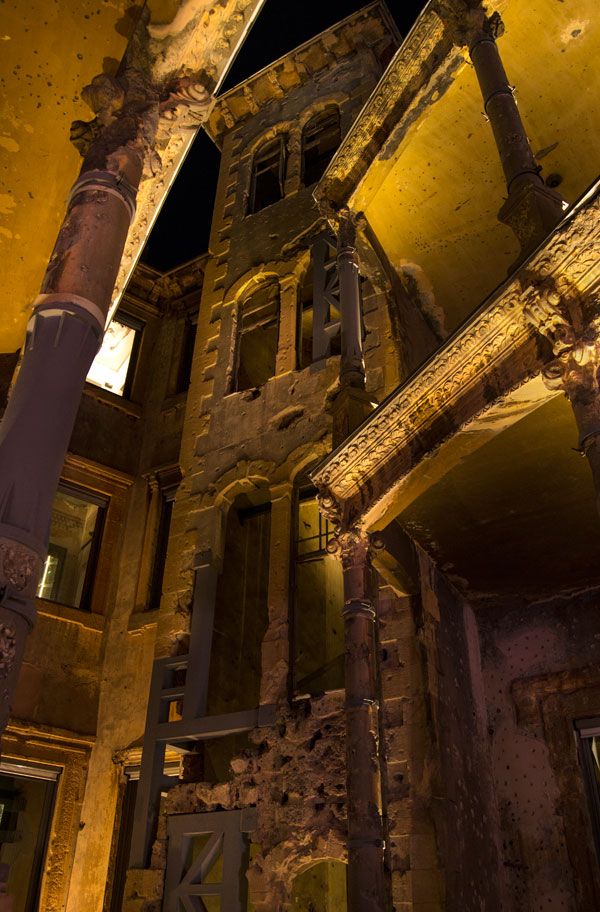 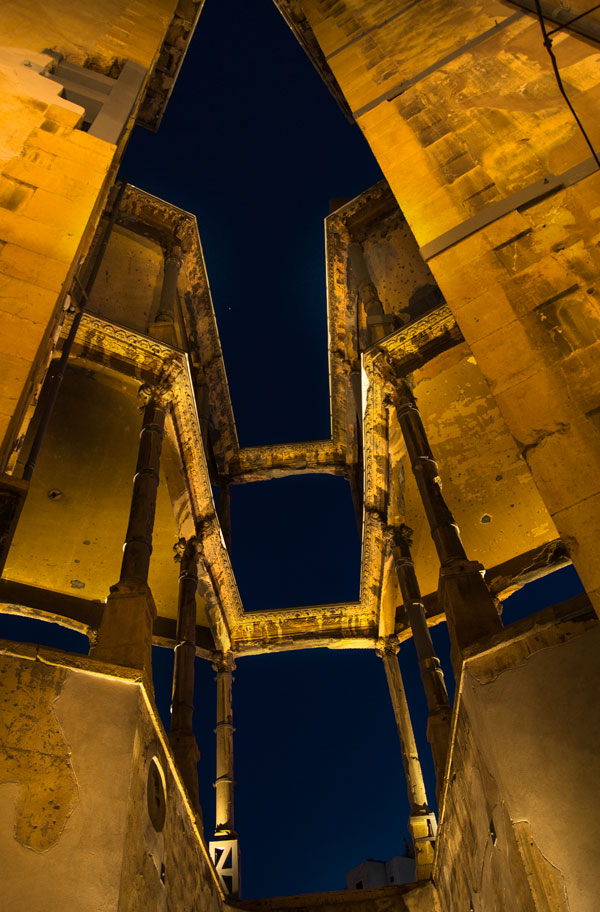 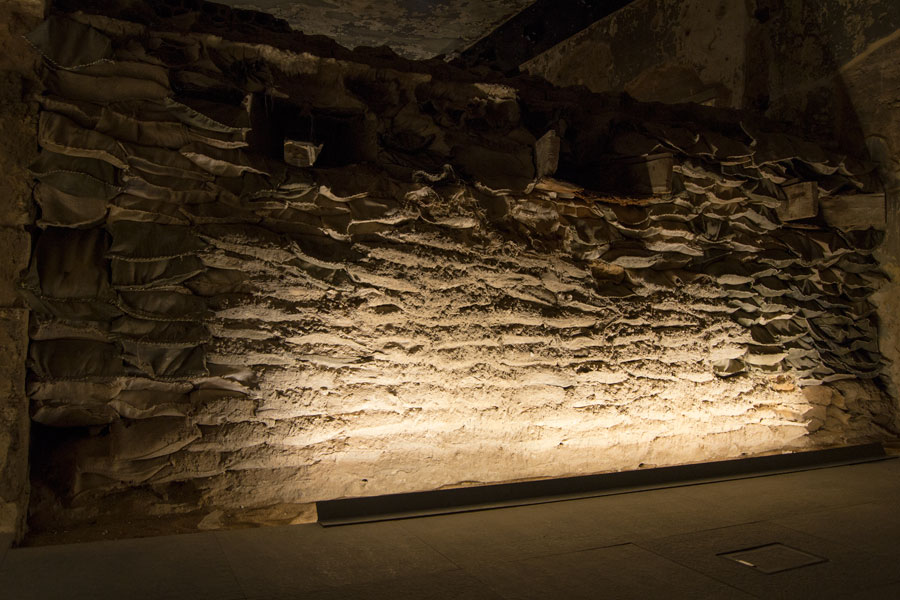 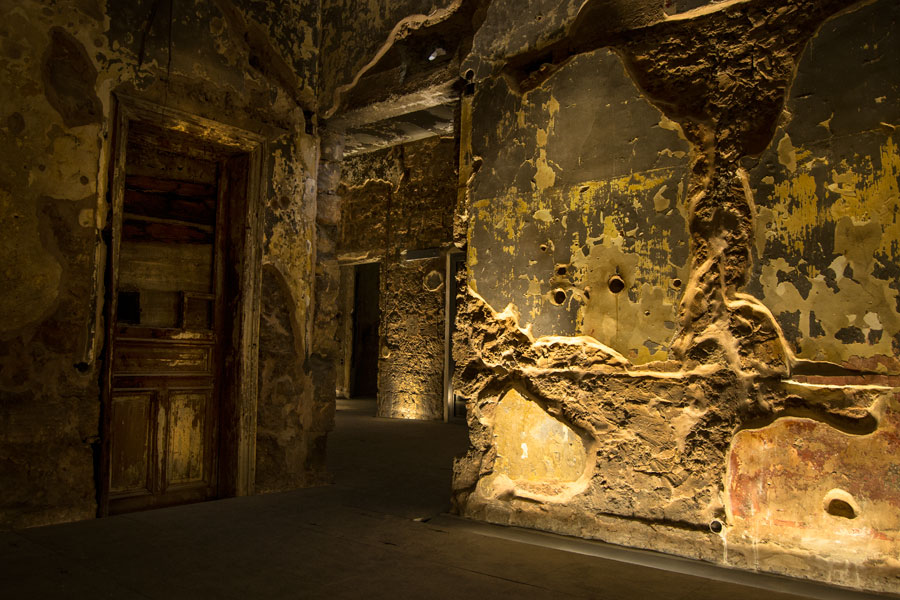 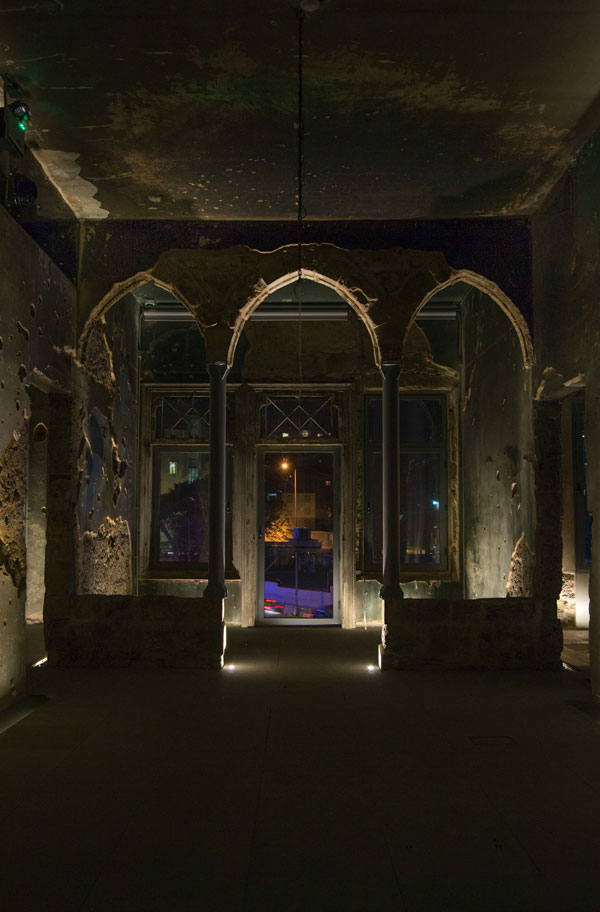 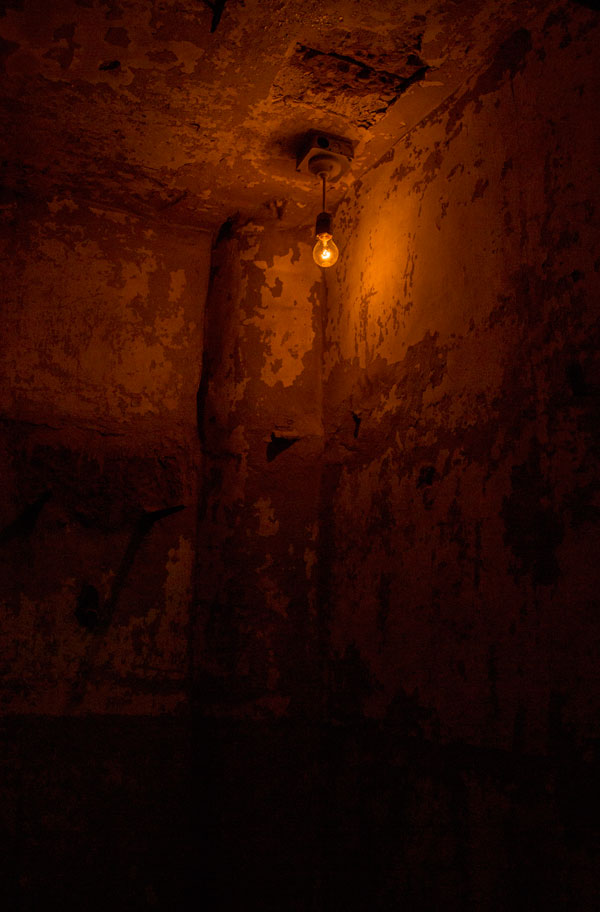 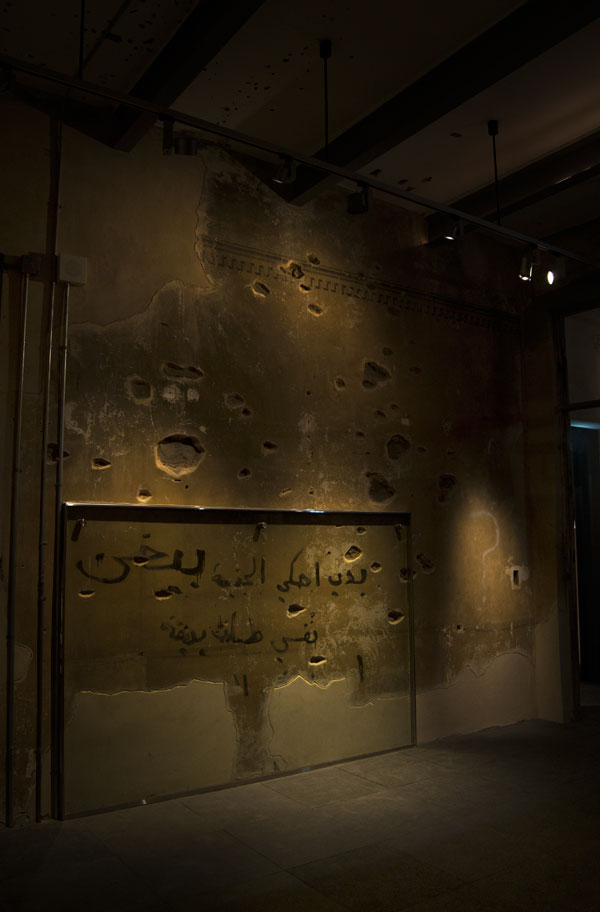 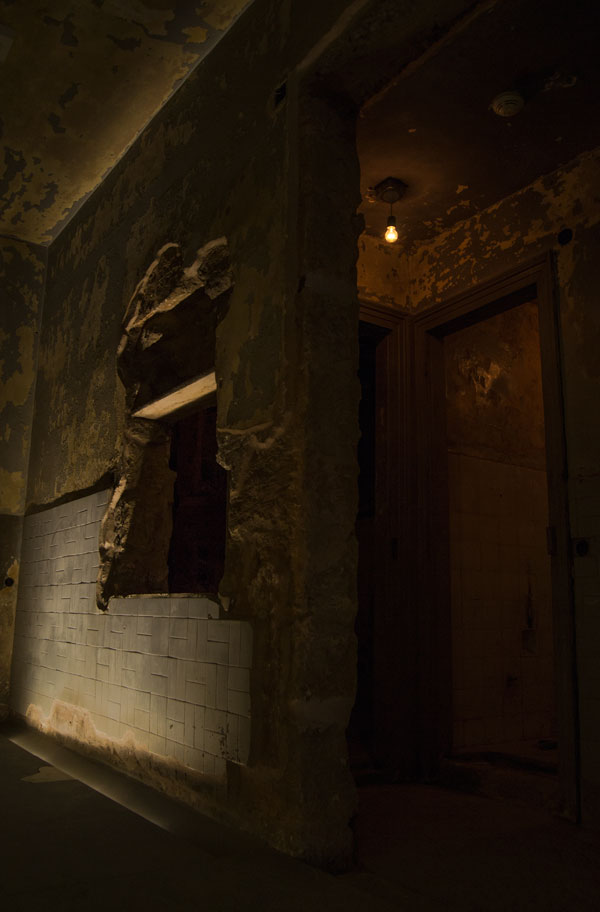 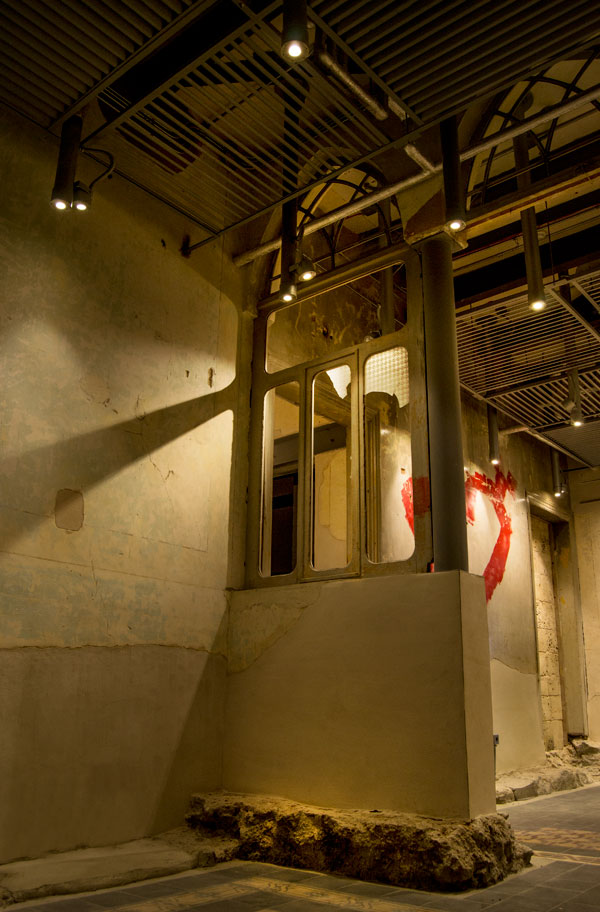 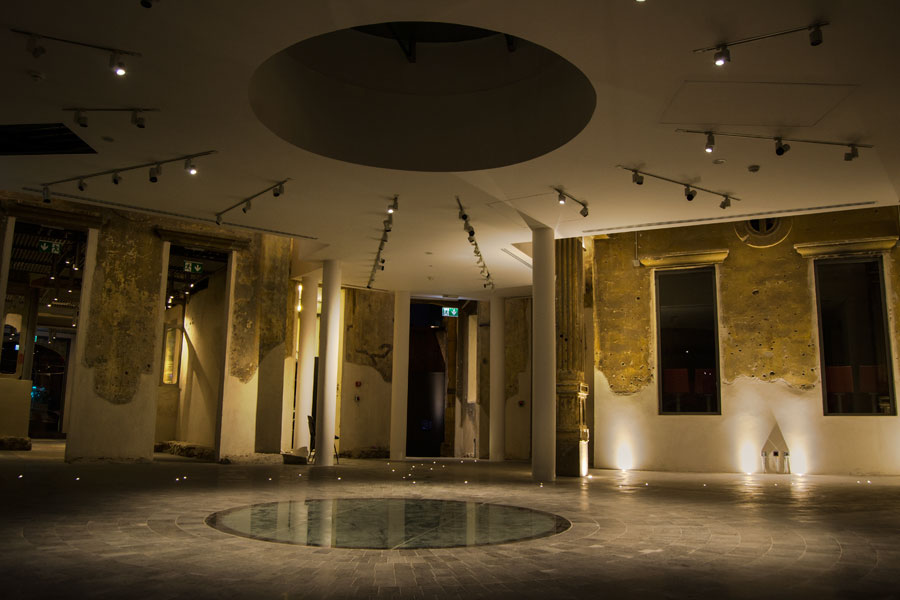 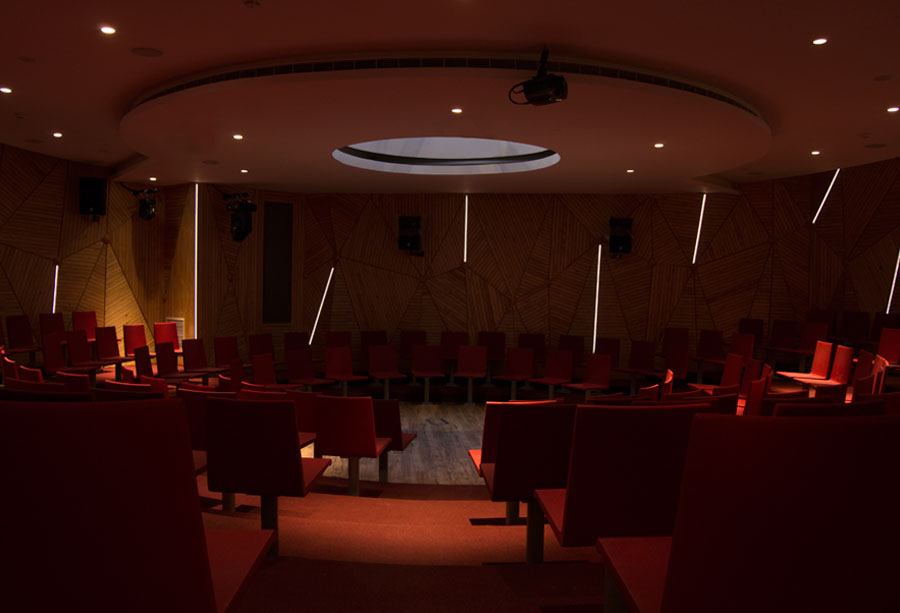 throughout 1924-1936, a residential complex was built to dominate Sodeco’s intersection. barakat building was composed of two separate asymmetrical structures, each three floors, and linked on the street corner by a common ground floor and entrance. the void between its two structures, veiled by delicately perched arches, brought forth a street view to every room in the six 500sqm apartments. its interior was as desirable as its architecture. art nouveau claimed the hand painted ceilings; art deco flooded the floors with colored patterns of marble tiles.

15 years of civil war landed the complex on the green line that separated east and west beirut. today it stands as the city’s first multifaceted cultural center, museum, and memorial space – beit beirut.

upon entering the building, you’ll notice a central space where the existing structure meets its extension. a versatile lighting layout was created here for the constantly changing exhibitions. track projectors rotating around a circular skylight’s center provide accent & ambient lighting. subtle lighting signals across the floor lead to a dominant ramp circulating vertically, linking the old structures to the new, and every floor in between.

architect youssef haidar paid tribute to the atypical void by keeping the extension disconnected. the result, a centered atrium and skylight peering into the ground floor entrance first, then basement’s theater below. with a narrow beam projector on the third floor directed towards the atrium, we enhanced a moonlight effect.

each floor serves as an episode of the city’s history; walking through them leaves the visitor emotionally aware of its transition. our expertise came with rendering these different emotions favored, and providing adequate lighting for the different functions.

the first floor serves as a memorial, untouched where snipers had positioned their bunkers, means to trigger an uneasy sentiment. our challenge was to subtly dramatize this experience with no false ceiling. we manipulated the raised floors to house linear luminaires, and with warm lighting, washed every scarred wall and bunker. other areas include dimmed incandescent bulbs hanging over remnants of kitchen sinks and toilet seats.

half restored, half preserved, a gradual warmth in atmosphere is realized upon arriving on the second floor. beams that run along the ceiling helped create two scenes using indirect light and track projectors; the first related to the exhibition and the second meant to accentuate what has been preserved in the building. with a false ceiling, skylights embedded with directed linear lighting give the impression of sunlight seeping through the third floor, while illuminating the rooftop’s terrace situated above.