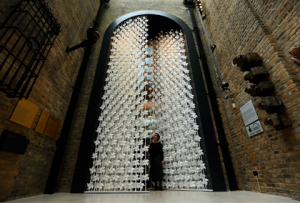 when lebanese based designer najla el zein teamed up with our very own maurice asso, the two flexed their expertise and gave birth to a unique experience for every visitor to V&A’s museum that fall of 2013. el zein sought to heighten one’s senses while transitioning from the museum’s existing spaces, to what served as her inspiration - its newfound extension, the Daylit Gallery. this temporary gate was a blend of various materials and systems. composed of 5,000 hand-folded paper windmills, these windmills were clipped together by hand-sculpted wooden joints. correspondingly, the joints were attached to the vertical tubes with the use of 3-D printed clips. a study carried out by asso allowed the integration of wind through small holes found along the tubes. when, where, and at what speed the tubes circulated wind was controlled by electronic signals. a separate system controlled a play of light, where brightening and dimming was hand in hand with what seemed to be spontaneous movements by the windmills. the result, despite a staggering 8 meters in height, the wind portal stood delicately inviting and whimsical. each paper whirled independently; all the while it beautifully belonged to a breathing body. having allowed visitors to become aware of their senses, the art installation was praised as “one of the must-see art pieces” found at 2013’s london design festival.